I’m Nuno, a product designer based in London.

I’m Nuno, a product designer based in London. Specializing in user interface design, with experience on web and iOS development.

I currently work at Google Health to bring new healthcare technology to the entire world.

Previously I worked with the IDEO team in Tokyo, I helped Thread reinvent personal styling in the UK, and prior to that, I was with the ustwo family in London and New York. 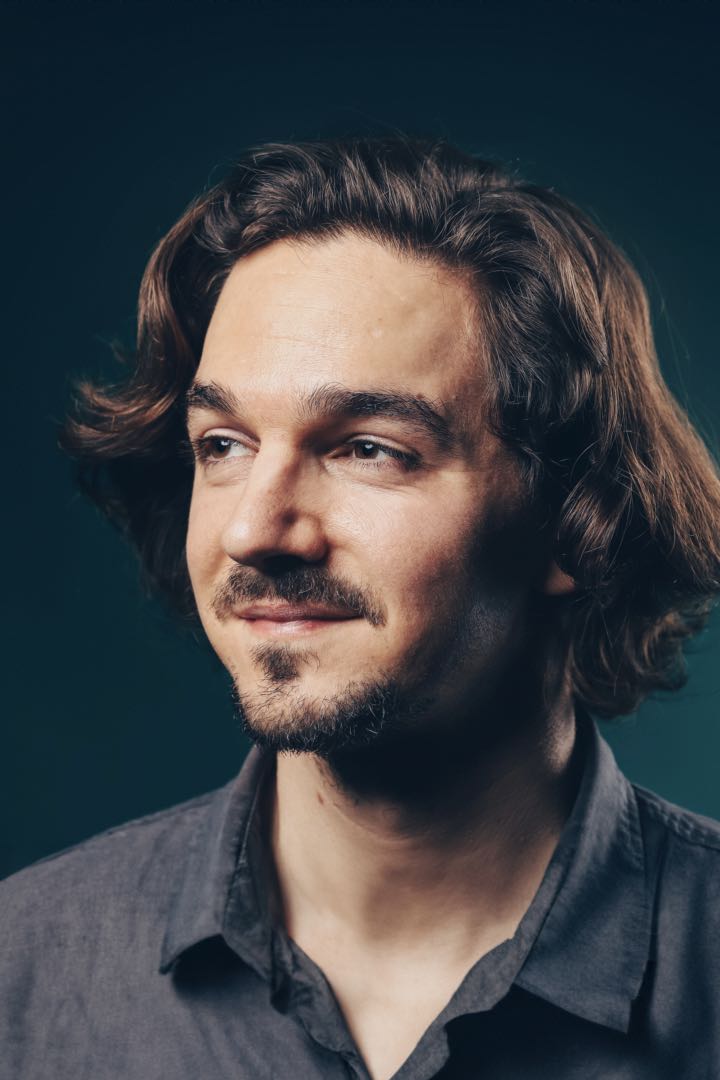 Currency is a simple currency conversion app for iPhone.

A side-project with the goal to create a product that does one job incredibly well and learn a new programming language along the way. Special thanks to Jonathon Toon, Johnny Linnert, Xin Nie, Asuka Yamashita, Alex Abian and Tiago Alves.

After having used various currency converter applications that are available on the App Store either free or paid, I found that these were either too complex, unintuitive, or yet to be updated to new iPhone screen sizes. Very often these apps have walkthroughs to explain the complex interactions, navigation or features they can provide to the user, instead of being simple to use.

I designed Currency to be the simplest and most intuitive currency converter in the App Store, that would look perfect on any iPhone screen.

Goals:
1. Very quick to use 2. Designed for travellers
3. No walkthroughs

The final design focuses on doing one job well: converting a foreign currency into the customer’s home currency. Features such as currency fluctuation graphs, in-app settings and notifications were not necessary for this job.

One of the most unique aspects of Currency is the formatting of the currencies, with the correct symbol, correct number of decimal places, decimal divider and group dividers.

The icon is designed to fit perfectly with iOS, presenting Currency as if it is part of the operating system. 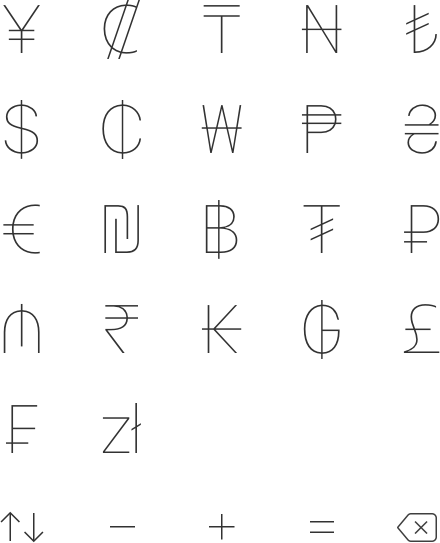 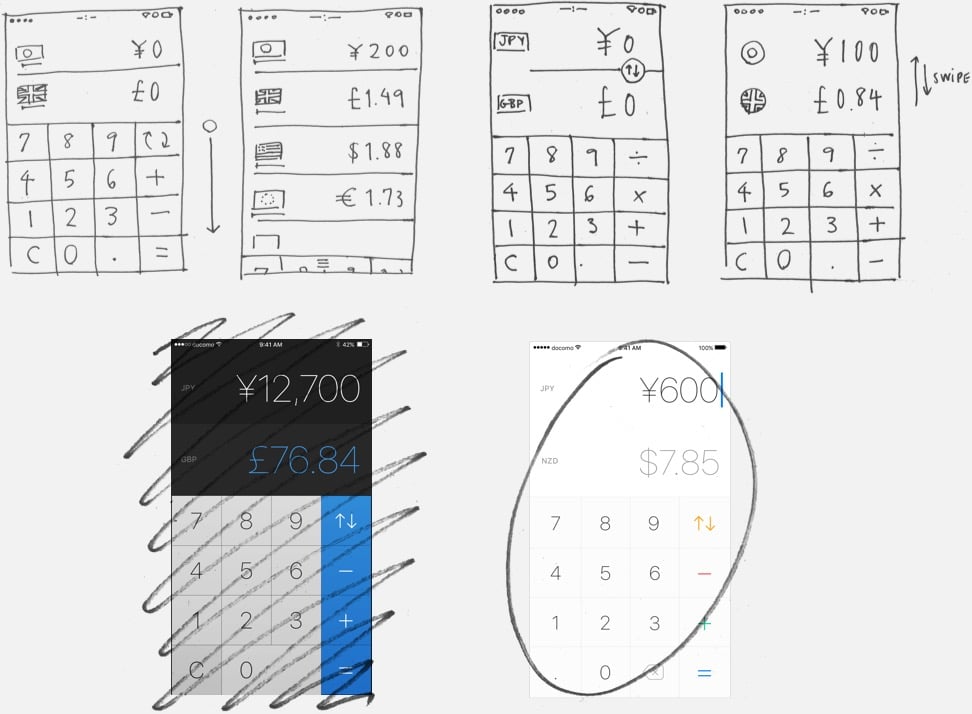 Some early sketches displayed multiple currencies on the main screen and used country flags. One of the early designs uses a blue and dark visual style that I later on retired. When I started development and showed the app to my friends they seemed confused about which number they were editing, so I added a text input blinking cursor.

The final design is bright and shows activity indicators when the currency exchange rates are being updated. Other settings were added via the iOS Settings based on user request. 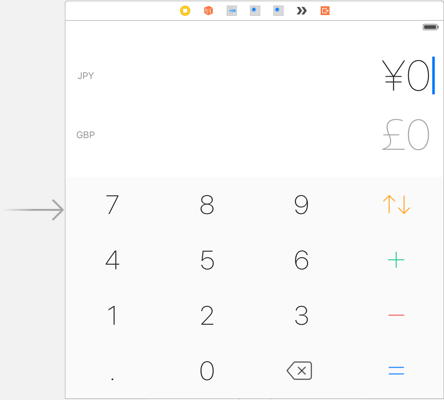 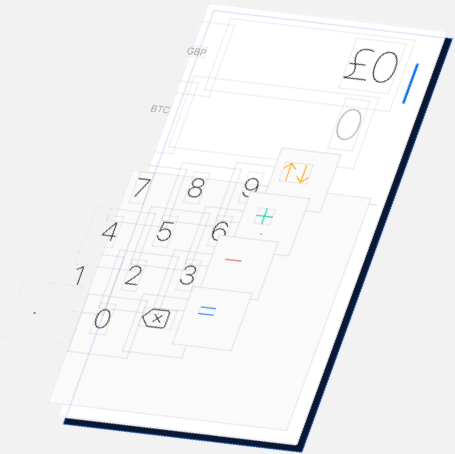 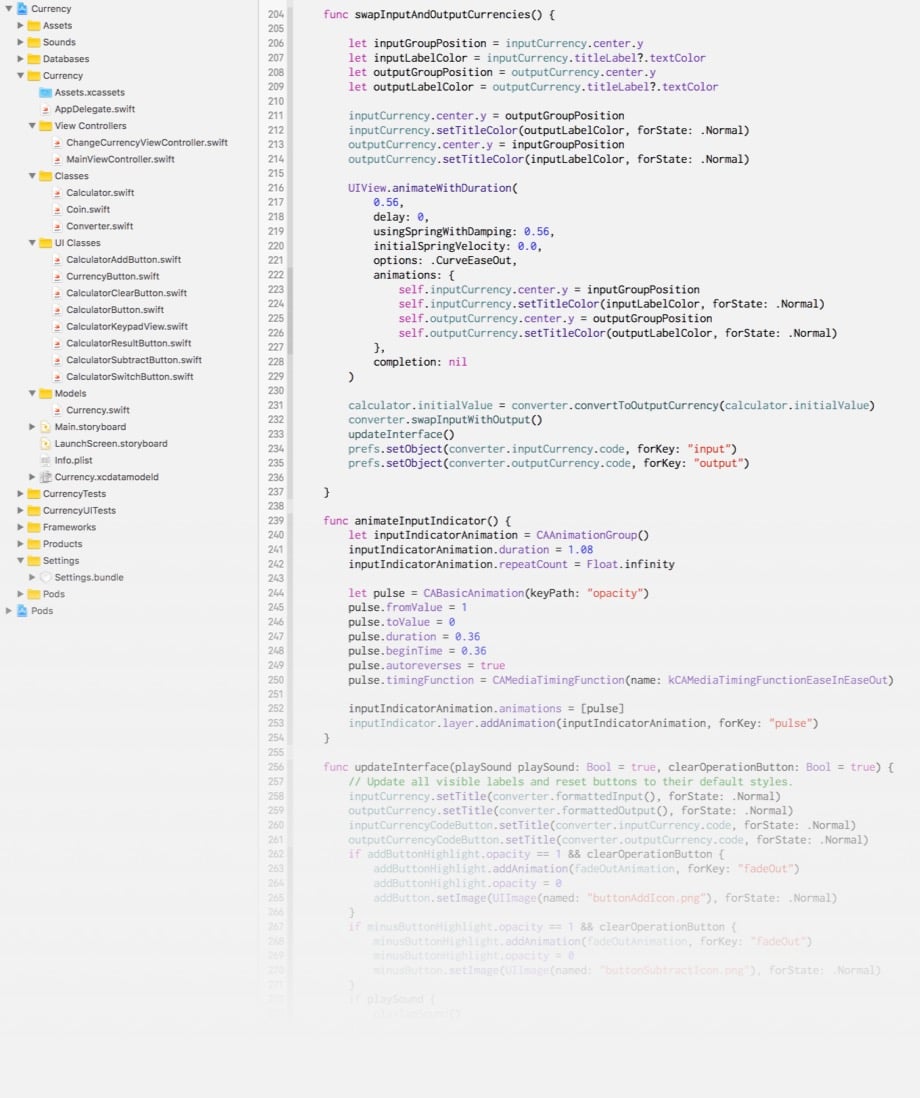 This was the first app I developed for iOS, and my first time writing Swift. The entire development of the application took about 3 months, with most of it being bug fixes and improvements to the code quality. The source is available publicly on GitHub. 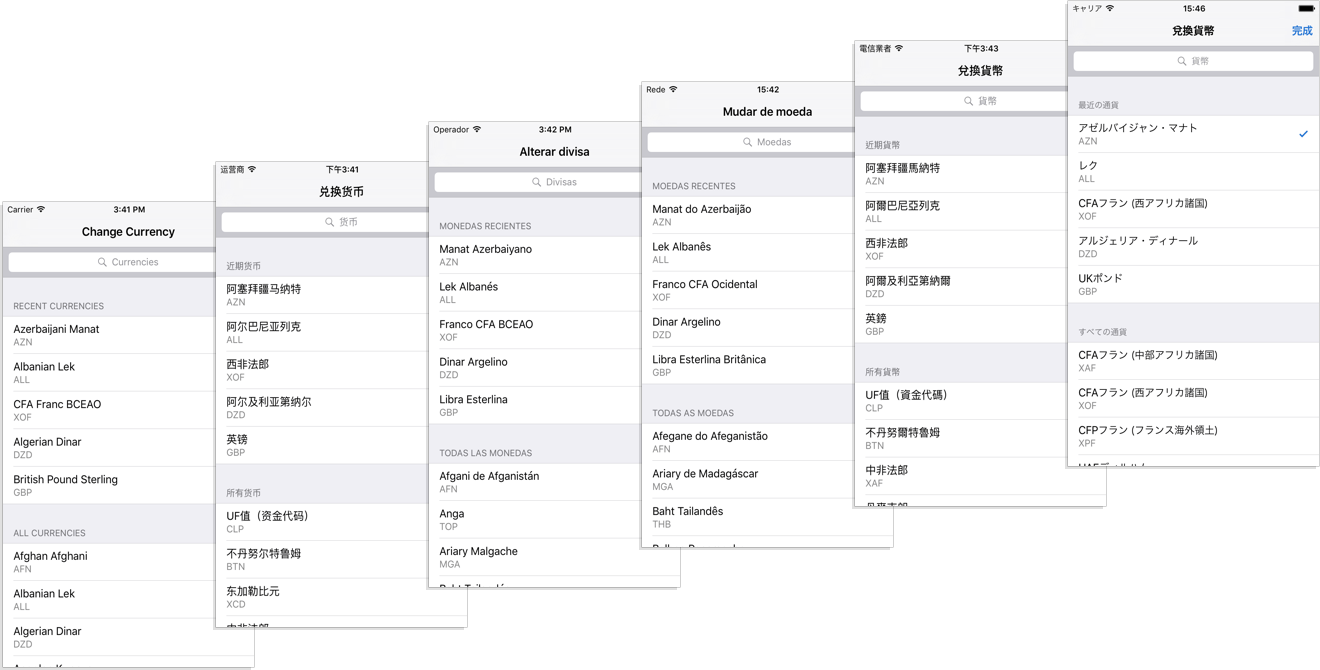 The application, website and marketing material was localized to the US, the UK, Japan, China, Hong Kong, Taiwan, Latin America, Spain and Portugal. Three months after release, 76% of the downloads came from the Asia/Pacific region.

Six months after release, Currency was downloaded over 6,000 times and has an average rating of 4.5 stars. You can download it for $0.99 on the App Store. 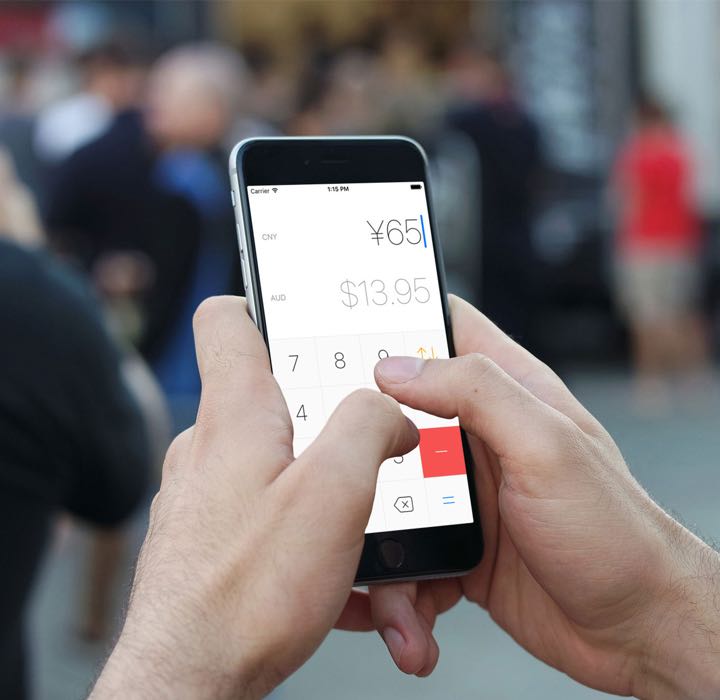 Thread is an online styling service, currently only for men in the UK, that joins the world’s best fashion stylists and Artificial Intelligence in a single platform to give users personal styling for free. Thread is a YC’11 start-up founded by Kieran O’Neill, Benjamin Phillips and Ben Kucsan. I joined the team in 2014 as a product designer and worked alongside some of with the smartest people I’ve met so far.

At Thread, we defined the long term vision for the company and broke it down into product, operations, styling and marketing goals. While I was part of the Thread product team, I would take on one of these challenge every week and set it as a weekly goal.

A typical week at Thread would include brainstorming and sketching on Monday, visual design and critics on Tuesday, prototyping and testing on Wednesday, development and testing on Thursday and Friday. Every Friday we would demo the work done and some of these solutions would be shipped on Monday the following week.

Thread users visit Thread from their mobile more and more over time devices, however internally we always had the habit of designing thinking on the desktop browser first. So in this project we looked at what the ideal mobile experience would be like and how we could reshape our design and development process to fit a mobile-first approach.

We started by tackling this challenge by designing a native iOS experience of Thread. We built a wireframe prototype and asked users to visit our office to use it. After a few interviews, everyone in the team felt like this was an improvement over the current experience. 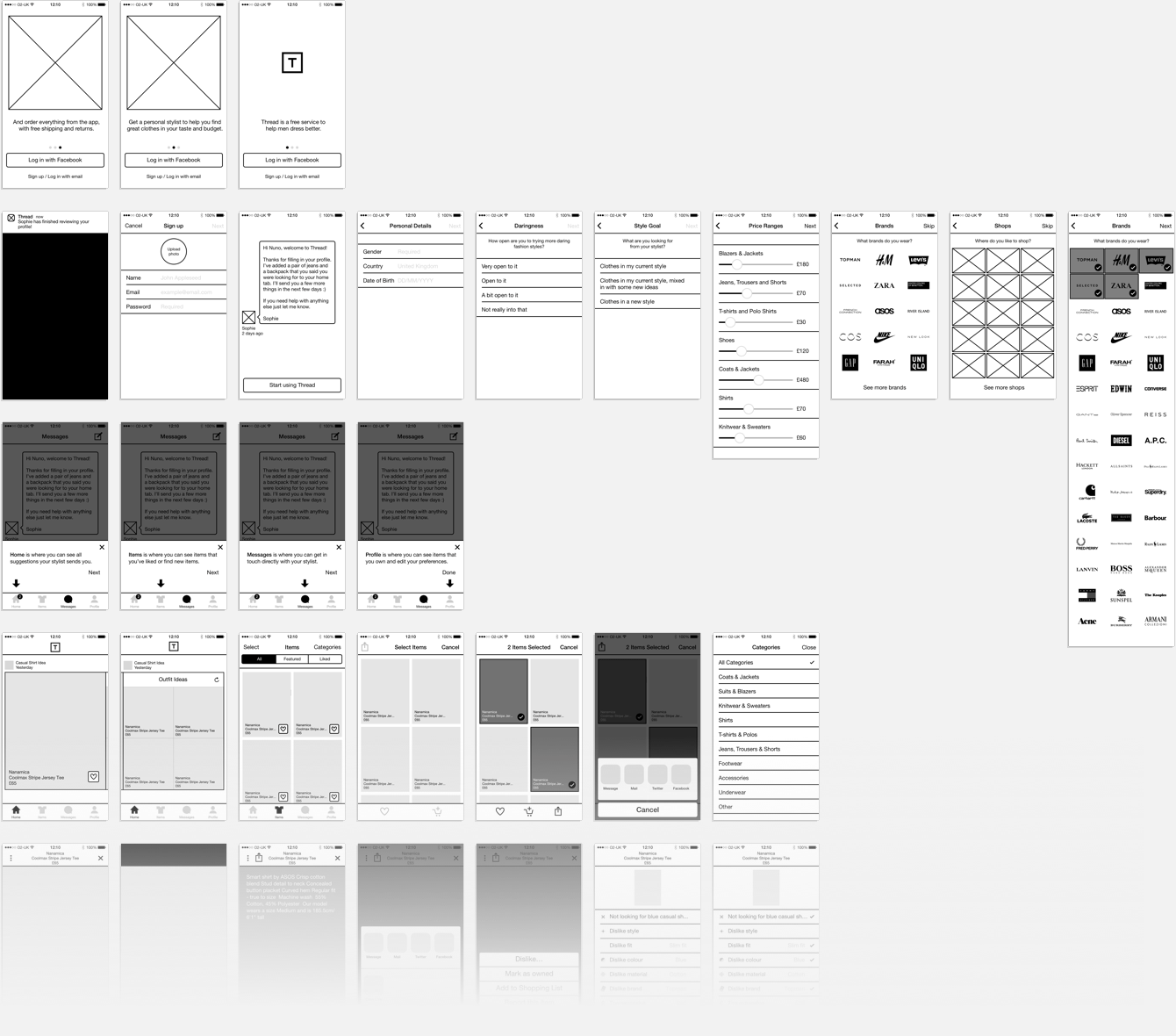 We also explored a different direction, that focused on systematizing our web experience to be more modular and targeted for mobile browsers. We called this new system Thread Whitechapel. It included new type styles, new touch interactions, new guidelines for flows and page content, and a new set of standard HTML components.

This resulted not only in a better mobile experience, but it also allowed us to design and develop faster while keeping our visual language consistent. 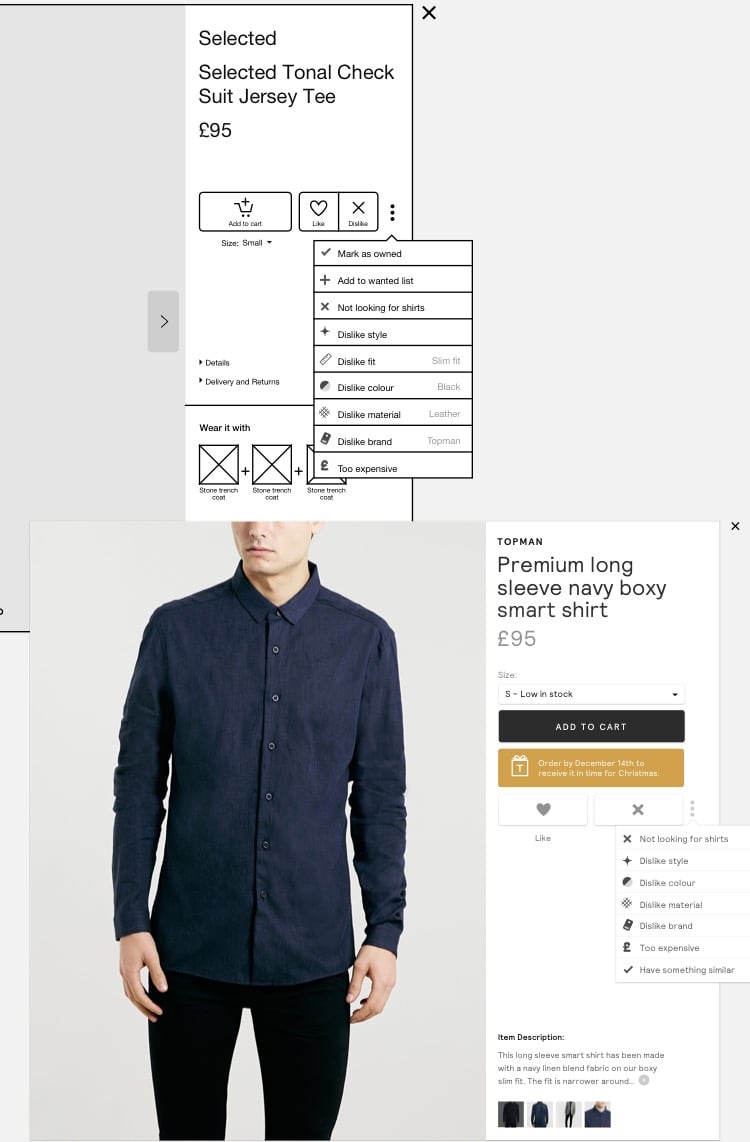 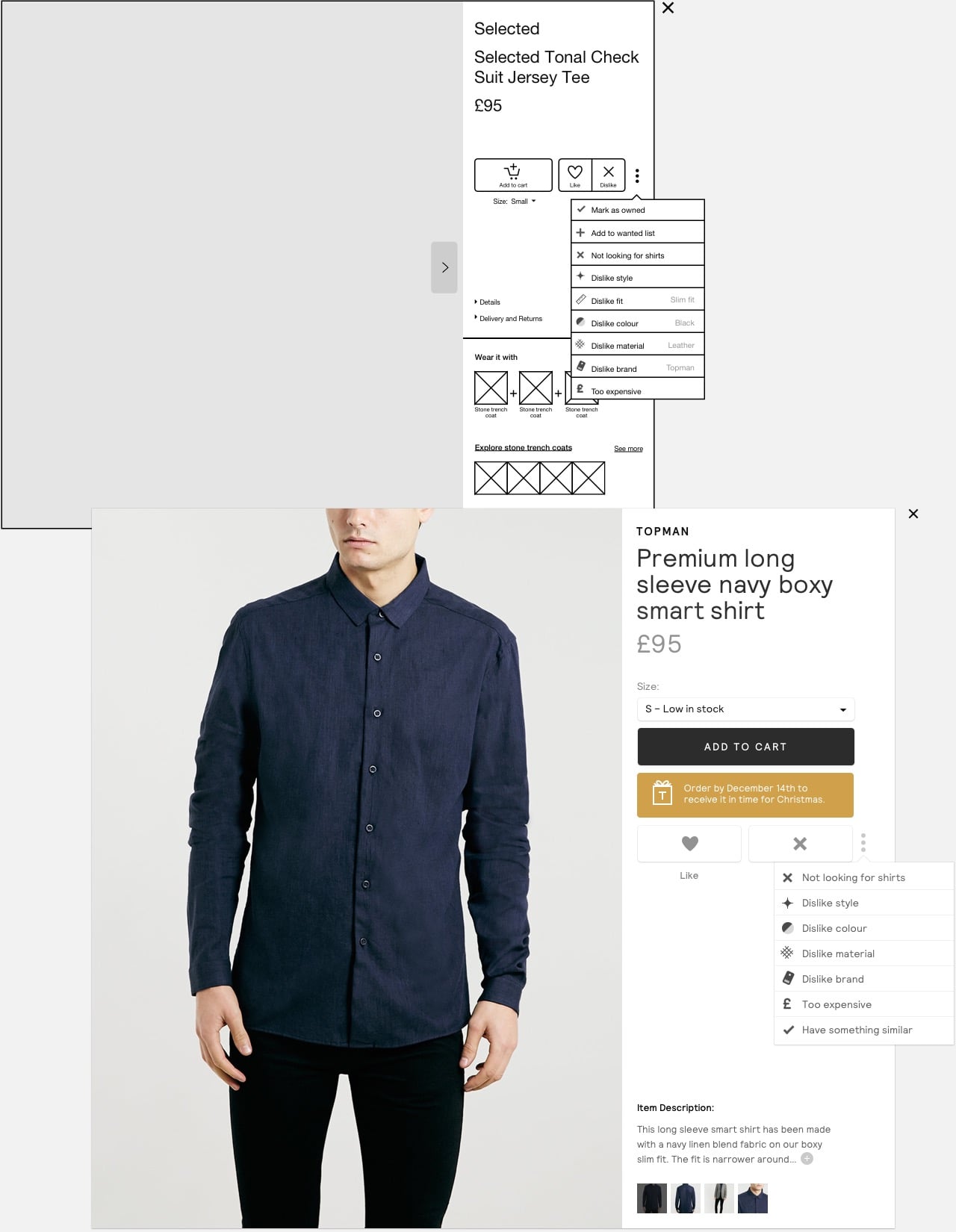 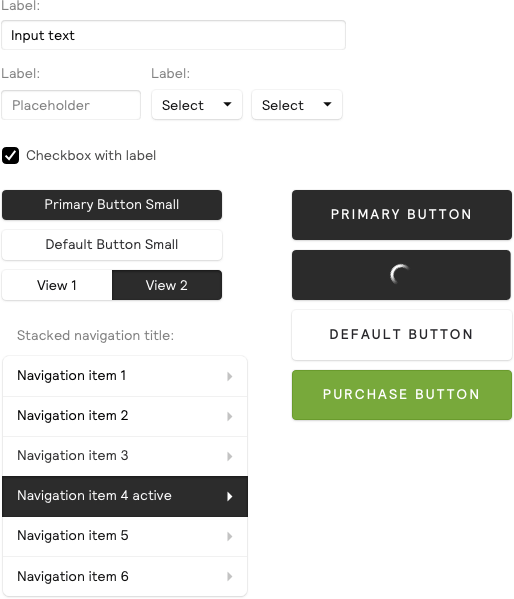 Challenge:
How might we keep providing a Thread service even while stylists are offline or in vacation?

Thread has a powerful recommendation engine that helps match the outfits each stylist makes to each client preferences, but when the stylists are away we can’t generate these recommendations for the users. So how should Thread work when this is the case?

At the time, stylists could use the Thread engine to find clothing items and users could receive recommendations from stylists. But a channel between the user and the Thread engine was missing. During the first week, myself and Dan Palmer explored how an experience of using Thread’s engine without having the stylist involved would look like to users.

We developed the concept of a curated store. Imagine a clothing line, made of the amount of items a person can realistically own. A curated wardrobe. We wanted an experience similar to walking to a clothing store and seeing only new items that you would love. This became Thread Browse.

Thread has thousands of items and there are thousands of online stores with thousands of items that are irrelevant to their users. Thread Browse is the curated shopping experience for when your personal stylist isn’t available. Designs show the items categorized by outer to inner-most clothing, and a limited number of results is displayed below. All matching the user preferences. 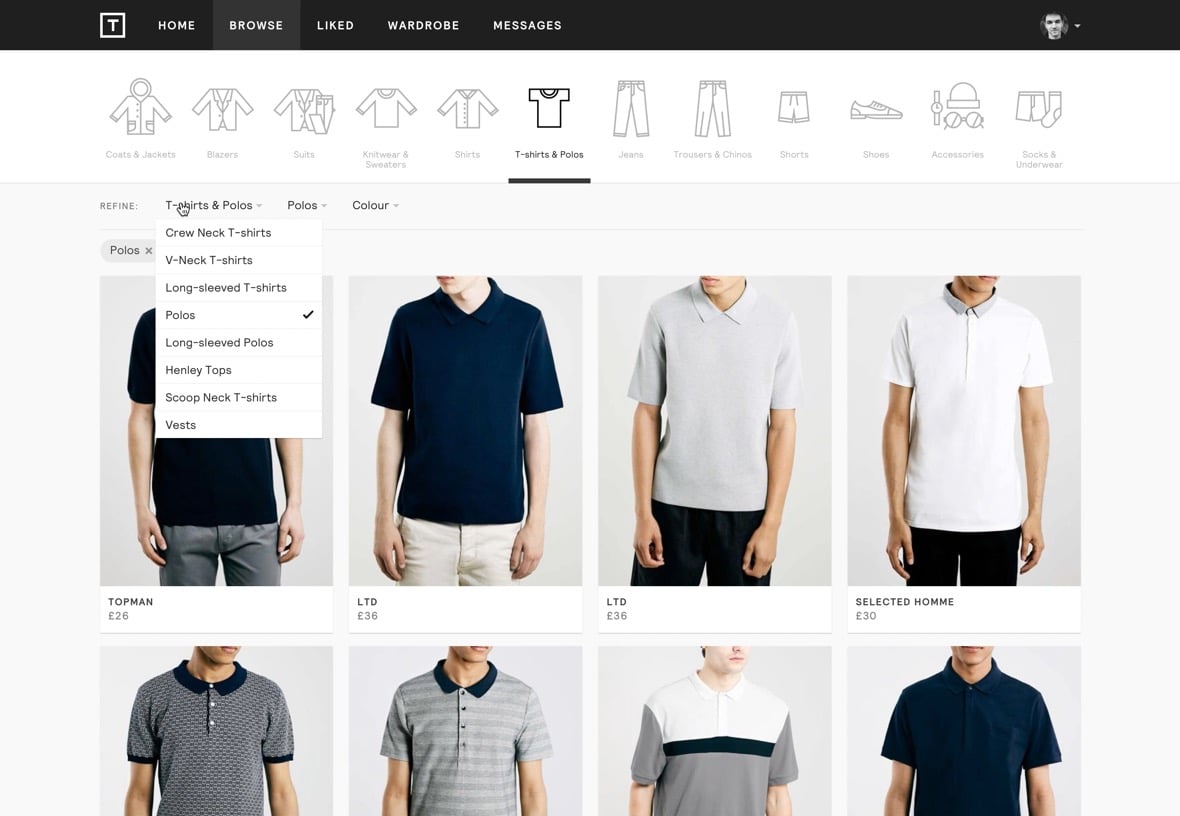 Thread has been growing steadily over the last few years and I’m incredibly proud of all the work we have done together. Thread will be available worldwide in the near future. If you’re looking for menswear styling in the UK, sign up here. If you’re interested about working at Thread, see their jobs page. 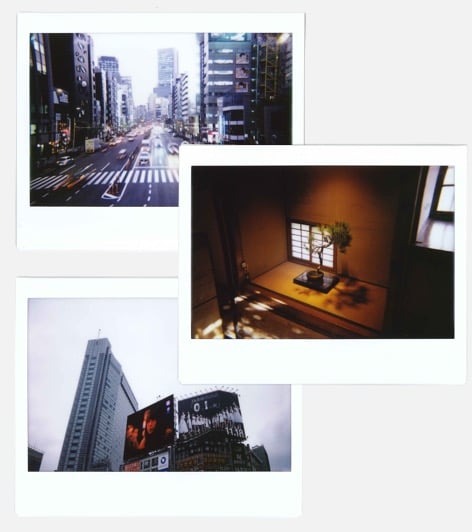 A Year in an Instant

When I moved to Japan I documented the first 365 days living there with instant photo each day. This is a Kickstarter project where the backers get to claim their favorite photo. Read it here. 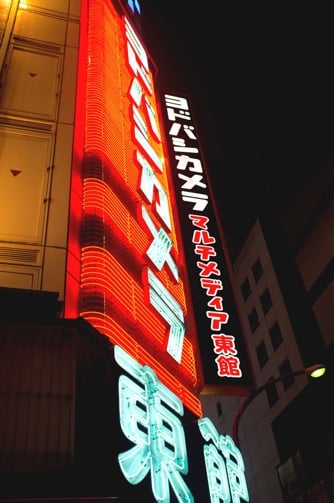 My most popular side-project—a travel blog where I documented my every step of my first 15 days in Japan. Read it here. 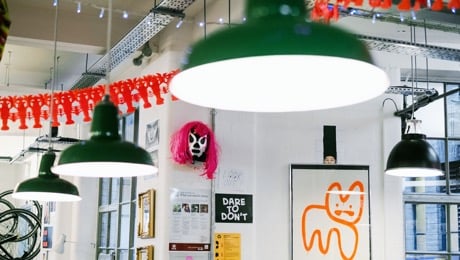 The rebrand for ustwo entirely inspired by the candid and daring company culture. This included a new logo, website design, typeface and tone of voice. See it here.

A visual design exercise as part of my training at ustwo. See the process here.

Thank you for reading. If you would like to discuss more, share feedback or ask any questions, please get in touch.